Panzanella is an Italian salad made with cubes of stale bread and fresh vegetables, usually tomatoes. The bread is softened up by the salad dressing and vegetable juices, and adds nice texture to the dish - this is a really great way to salvage old bread that is too stale to be eaten on its own. Although panzanella can be made with a number of different vegetables, I chose to keep it simple, and just used some lovely heirloom tomatoes and basil.

You'll want to use crusty bread, at least one day old, to make this. I used a baguette that was several days old, but a hearty whole grain loaf would have been even better. I like to jazz up the bread cubes a bit by toasting them garlic and thyme, an idea I got from Heidi's spring panzanella recipe. This add some nice flavors and also helps the bread keep just a bit of crunch even after it soaks in the dressing. 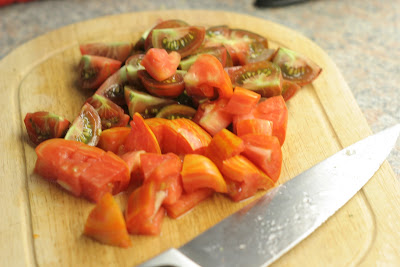 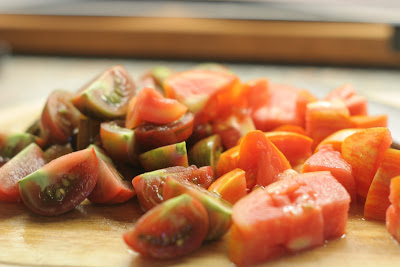 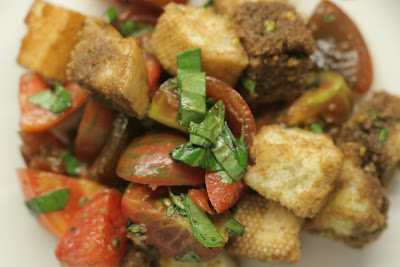 Toss bread cubes with garlic, thyme, and 1 tbs oil, sprinkle with salt, and toast in a 350 deg F oven until crunchy. When finished, place croutons in a large bowl. Toss tomatoes with basil, remaining 1 tbs olive oil, and balsamic vinegar, and season with salt and freshly ground black pepper. Pour the tomato mixture over the bread cubes. Toss well to combine and coat the bread with dressing. Let sit for at least 15 minutes before serving to allow the bread to soften and flavors to meld.
Posted by Ranjani at 7:15 PM