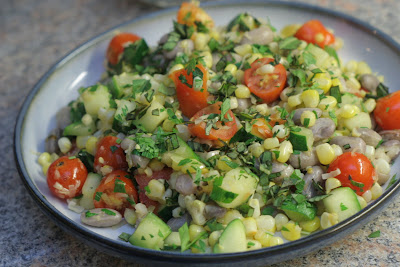 This dish is a perfect example of the idea that foods that are in season together taste good together. Creamy beans, sweet corn, and crisp-tender zucchini, topped off with some fresh tomatoes and herbs - if you think of succotash as something that comes from the freezer section, it is time to think again. Succotash has been in my mind ever since I saw Deb's post about it, and I decided to try a version from Alice Waters's book, The Art of Simple Food. Alice Waters is an authority on local, seasonal cooking, and her recipes are a great place to find some ideas and inspiration. This book is one of the first places I look when I don't know what to do with a particular vegetable.

This was my first time trying fresh cranberry beans, which I used instead of the traditional lima beans. I used a leek instead of onion, because I had a leek that had been sitting in the fridge for two weeks, and desperately needed to be used. I hadn't originally planned on using tomatoes, but I got a bunch of cherry tomatoes from my mother-in-law and made a last minute decision to toss them in there. The tomatoes were a great addition - they add good color as well as some nice acidity. Overall, this is a beautiful way to use the produce that is overflowing at the markets these days. 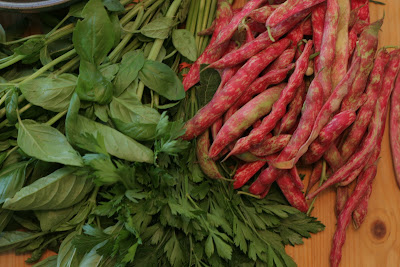 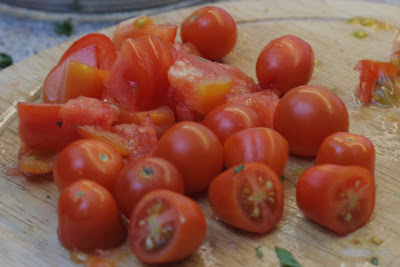 1 cup fresh shell beans, such as cranberry or lima, shelled
2 ears of corn, husks removed and kernels sliced off with a sharp knife
1 leek, white and light green parts only, chopped (or use 1 small onion)
1 medium zucchini or summer squash, diced
2 tablespoons butter or bacon fat (I used bacon fat because it is so good with corn)
3 thyme sprigs
1-2 tbs chopped parsley
1-2 tbs chopped basil
1 handful cherry tomatoes, larger ones sliced in half

Put beans in a small pot and add water to cover by 1 1/2 inches. Bring to a simmer and cook until tender. The amount of time will depend on the bean you use - Alice Waters says to start checking after 10 minutes. The cranberry beans I used took at least 30 minutes to become tender and creamy. When done, drain beans and season with salt.

Meanwhile, melt butter or bacon fat in a heavy pot over medium heat and add leek and thyme. Cook for 5 minutes and then add zucchini. Cook for 5 more minutes, then remove the thyme sprigs and add the corn kernels. After 1 minute, add the beans, and cook for another 3-4 minutes until corn is tender. Remove from heat, salt to taste, and then toss with tomatoes and herbs. The residual heat will soften the tomatoes slightly while still allowing them to keep their texture and shape. This can be kept in the fridge for a couple days.
Posted by Ranjani at 1:16 AM