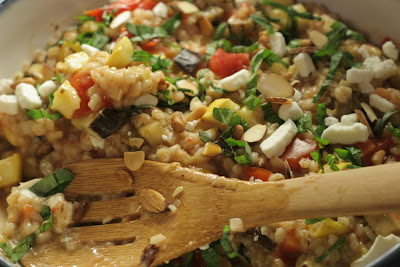 I've been finding all kinds of good eggplant recipes lately. This one is from Cooking Light, September 2009 and is my Magazine Mondays entry for this week. I made this recipe for the first time soon after that issue came out, but I made the mistake of using whole grain hulled barley, which is fine if you're just simmering it in a pot of water, but not so good for something like risotto, which requires lots of attention and stirring. It took forever to cook - we actually ended up losing patience and eating it while the barley was still a bit raw...not so good.

I remembered the recipe recently, and decided to give it another try. This time I followed the instructions, and used pearled barley. I made a couple substitutions to the other ingredients though - I didn't have enough pine nuts around, so I used a mixture of pine nuts and sliced almonds. I also substituted summer squash for half the eggplant (needed to get through the excess of squash in the fridge), and was quite happy with the result. This dish came out really good - full of summer vegetables, with a great mixture of fragrant basil, crunchy nuts, and creamy cheese on top. 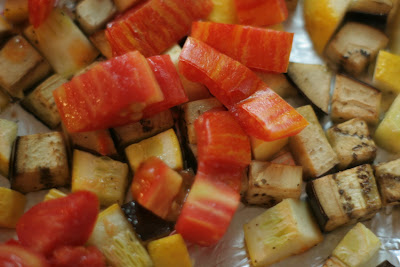 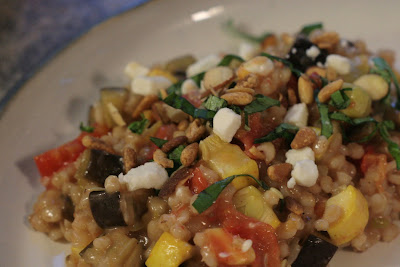 Preheat oven to 400 deg F. Toss eggplant and summer squash with 2 tbs oil in a bowl. Arrange vegetables on a cookie sheet and sprinkle with black pepper. Roast at 400 deg F for 10 minutes. Meanwhile, toss tomatoes with 1/2 tbs oil. After eggplant and squash has roasted for 10 minutes, add tomatoes to pan and roast for 10 more minutes, or until tomatoes begin to collapse and eggplant is tender.

Combine broth and water in a pot and bring to a simmer, then keep warm over low heat.

Heat remaining 1 tbs oil in a large saucepan over medium-high heat. Add onion and saute until onion begins to brown, about 4 minutes. Stir in garlic and barley and cook for 1 minute. Add wine and cook until wine is almost fully evaporated, stirring constantly. Add 1 cup broth mixture and bring to a boil, stirring frequently. Cook until liquid is almost fully absorbed, continuing to stir frequently. Add remaining broth mixture 1 cup at a time, each time cooking (and stirring frequently) until broth is nearly absorbed. Repeat until barley is cooked - it should be tender but still have texture, and the mixture will be thick and creamy. This takes about 40 minutes or so.