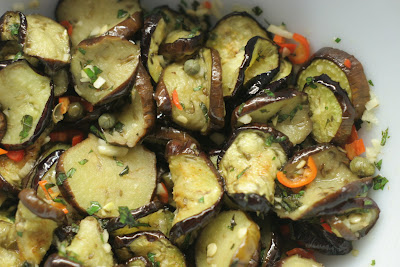 The photo of this dish in The Silver Spoon makes eggplant look so delicious and tempting - in fact, that photo was what got me going on the streak of eggplant recipes I've been trying lately (I'm looking at the photo right now and it's actually making me hungry, even though I just ate a pretty big dinner). Sadly, eggplant will be out of season soon, and then I guess I'll have to find a more autumnal obsession...

This recipe is easy to put together and has an interesting combination of flavors. We ate this over pasta, but it would be even better on top of toasted slices of hearty bread, kind of like an eggplant bruschetta. The only major change I made to the recipe was to broil the eggplant instead of sauteing - just decided broiling was easier and would require less oil. I'm sure grilling the eggplant slices would work well too. 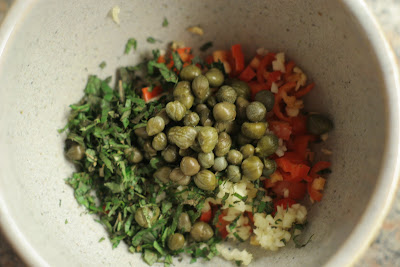 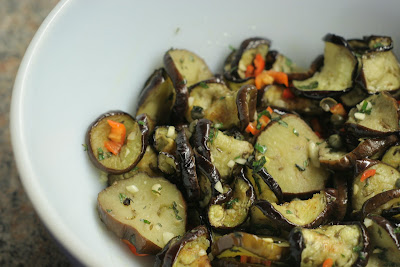 Sprinkle eggplant slices with salt, place them in a colander, and allow to drain for about 30 minutes. Meanwhile, preheat broiler. Rinse eggplant, pat dry, and brush with olive oil. Arrange eggplant on a broiling pan and broil for 7-10 minutes total, turning once (turning is not strictly necessary, but it is the only way to get both sides of the eggplant to brown), until tender and golden brown. Combine the chile, garlic, capers, and mint in a medium bowl and season with salt and freshly ground black pepper. Add 1/4 cup olive oil and eggplant to bowl; toss until well combined. Allow to marinate in a cool place for at least 6 hours (although we ate ours after only a few minutes, and it was still great). Serve over bread or pasta.
Posted by Ranjani at 11:08 PM