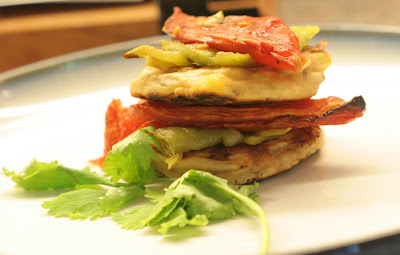 It's almost fall. Winter squash, brussels sprouts, and apples are appearing at the farmers' market, which means the summer vegetables are on their way out. I love fall in Boston, especially the weather, foliage, and back-to-school season energy, but I'm really going to miss summer produce. I better enjoy it while it lasts...

I had frozen a few cups of fresh corn kernels a couple weeks ago, and decided to use them to make these fritters for a light Saturday afternoon lunch. The recipe came from the September 2010 issue of Cooking Light, and I'm submitting this post to Tina, who is guest hosting this week's Magazine Mondays. The fritters were a hit - both Andrew and my sister, who just moved to Boston (yay!), loved them.

I made quite a few changes to the original recipe: I used white whole wheat flour instead of all-purpose in the batter, and added lime zest and smoked paprika. I served the corn fritters with roasted tomatoes and Anaheim chile peppers, and left out some of the accompaniments that the original recipe suggested, mostly due to lack of ingredients. I think these fritters would be stellar with some avocado and bacon as well. The last major change I made was to do the roasting at a higher temperature than the original recipe instructed - this allowed the pepper skins to brown and blister, and made the tomato roasting go quicker. 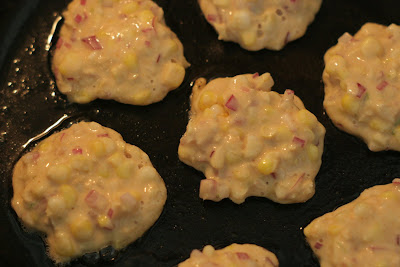 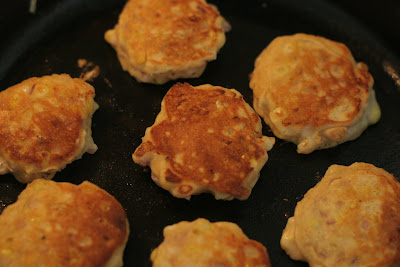 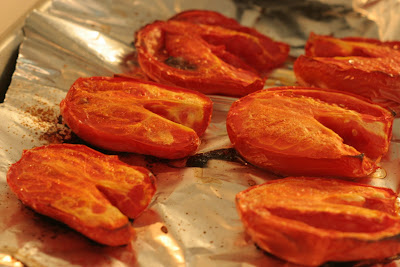 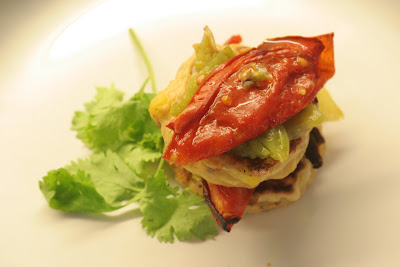 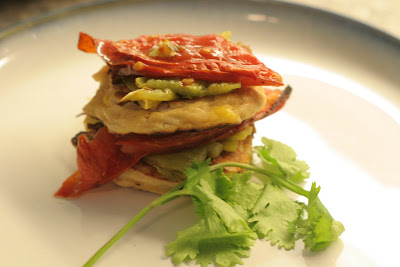 Preheat oven to 425 deg F. Arrange tomato halves cut side up on a baking sheet and brush with olive oil. Place pepper halves skin side up on the baking sheet, and roast vegetables in the preheated oven. Remove peppers when the skins are browned and blistered (about 20 minutes), and place in a tupperware container or paper bag. Close container to let peppers steam. Roast tomatoes for about 45 minutes total, or until they are soft and have lost some moisture.

While vegetables are roasting, combine flour and baking powder in a medium bowl. Add milk and egg and stir until smooth. Mix in corn, onions, salt, paprika, and lime zest.

Heat bacon fat or oil in a large skillet over medium heat. Drop batter by level tablespoonfuls into pan and cook 2 minutes, or until tops are bubbling and edges are golden. Carefully flip fritters over and cook 2 more minutes, or until gold brown on both sides. Repeat with remaining batter.

Peel peppers and cut them into strips. Slice the roasted tomato halves. Serve fritters layered with pepper and tomatoes.
Posted by Ranjani at 6:52 PM