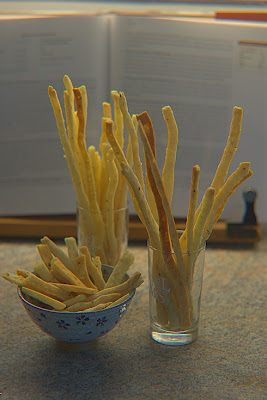 This is a fun recipe to make for a party. It's not complicated, but rolling out and handling the dough is a bit tricky. I had this bookmarked from Smitten Kitchen for just over a year, and then finally made it as an hors d'oeuvre for our last dinner party. They taste like spicy Cheeze-Its and make a nice snack to enjoy with some beers. 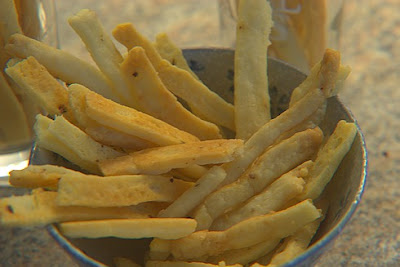 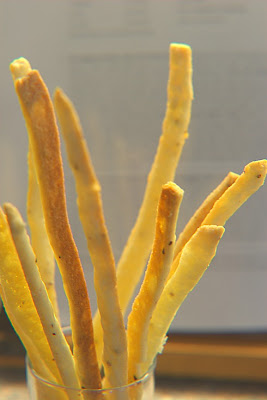 Cheese straws
Adapted from this recipe at Smitten Kitchen

Preheat oven to 350°F. In a food processor, mix together the cheese, butter, flour, salt and red pepper in 5-second pulses until coarse crumbs form - this took about 5 pulses. Add the cream and process until the dough forms a ball, 10 seconds or so.

On a lightly floured surface, using a floured rolling pin, roll the dough into an approximately 8- by 10-inch rectangle that is 1/8-inch thick. A warning: if you do this on a hot summer day, this gets tricky. Keep flouring the rolling pin as needed and work as quickly as possible. With a sharp knife (I used a pizza cutter), cut the dough into 8-inch strips, each 1/4- to 1/3-inch wide (dipping the knife in flour very often helps with this). Carefully transfer the strips to an ungreased cookie sheet, leaving at least 1/4-inch between them. Transferring the dough is a bit tough - it's delicate and breaks if it sags too much. From my experience, it is easiest to cut a strip and transfer it immediately, rather than trying to transfer multiple strips together. I used a bench top scraper to lift half the strip and draped the other half over my hand. Anyway, even if you do break them, it doesn't really matter. They'll still bake correctly and will taste good, they'll just be shorter.

Bake the straws on the middle rack for 12 to 15 minutes, or until the ends are just barely starting to brown. I tried baking two sheets at once, and the pieces closest to the sides of the oven started to brown before the middle was done. It is probably best to do one sheet at a time and keep it in the middle. When finished, remove from the oven and set the cookie sheet on a rack to cool.
Serve at room temperature. These can be kept in the fridge for a couple days, but they were best on the first day.
Posted by Ranjani at 10:25 PM