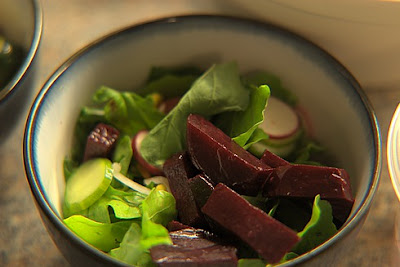 I had never tasted a beet until last summer when I picked some up at the farmers' market on a whim, figuring that if I'm going to try this weird looking vegetable, I might as well start with a fresh, local specimen. Well...turns out that I love beets. I'll eat them hot, cold, plain, marinated, even grated raw in salad. But I've never ever eaten them out of season, because I'm afraid that the somewhat dull-looking ones at the supermarket just won't be up to par. I generally roast them using Alice Waters's recipe, and lately have been tossing them with sherry vinegar and olive oil. We've eaten them prepared like this as a side vegetable on their own, or put them in salads. Marinated beets
Adapted from The Art of Simple Food, by Alice Waters

Trim the greens and stems to about 1 inch from 1 bunch beets (I usually get 4-5 beets per bunch - it's easiest if they are all about the same size. I like to use red beets because they're nice to look at, but Chiogga beets are tasty too). Wash thoroughly. Put them in a baking dish with enough water to cover the bottom of the dish to a depth of 1/8 inch and sprinkle with salt. Cover tightly with foil and bake the beets in a 350 deg F oven until they can be easily pierced with a sharp knife, 30 minutes to 1 hour, depending on their size. Uncover and cool. Cut off their tops and roots and slip off the skins.

Cut peeled beets into small wedges and sprinkle with sherry vinegar and extra virgin olive oil (about equal proportions of oil and vinegar work well here. Use enough to coat the beets but not much more than that). Red wine vinegar would also work if you don't have sherry vinegar. Let stand for a few minutes and add more dressing and/or salt to taste. These can be served immediately, but also last in the fridge for a few days.
Posted by Ranjani at 10:58 PM