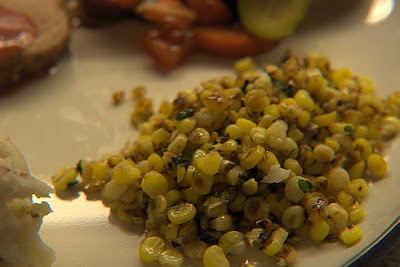 I found this recipe on The Wednesday Chef, a beautifully written food blog by Luisa Weiss that I read frequently. Luisa kind of freaked out over this one, with good reason -- it's a fantastic, simple recipe, and the cooking method has become one of my favorite ways to prepare corn. The recipe is actually written for frozen corn, but I used fresh corn that I picked up at the farmers' market. The mint here is kind of unexpected, and really good, but I've found that the browned, caramelized corn tastes great with basil instead of mint, or even with nothing but salt. I could imagine other variations too -- maybe cilantro, or some smoked paprika...

Caramelized corn with fresh mint
Adapted from The Wednesday Chef, the specific post is here
Serves 2-3

I'm including instructions for both fresh and frozen corn.

1 10-ounce package frozen corn, or 3 ears of fresh corn, husks removed
1 tablespoon unsalted butter (I think bacon fat would be a great to use instead)
2 tablespoons minced fresh mint
Salt


If using frozen corn, defrost the corn in a colander, tossing occasionally, for about 30 minutes. This is important -- if you don't defrost enough, the corn doesn't caramelize well. If using fresh corn, cut kernels off with a sharp knife.

In a large, wide skillet, melt the butter over high heat. Add the corn and cook, stirring often, until golden and browned (kernels will probably begin to pop, which is super fun). Stir in the mint and sprinkle with salt to taste. This is best served immediately, but still tastes pretty good reheated a day later.