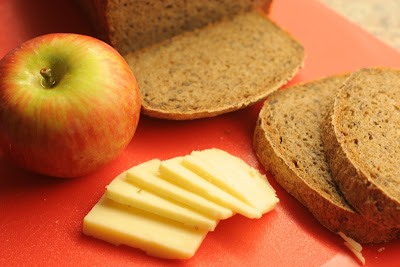 I like a good sandwich as much as the next person, but for me, sandwiches fall squarely into the lunch food category, not dinner food. I'm not sure why, since I consider burgers and quesadillas to be perfectly acceptable for dinner, and they're basically sandwiches...But in any case, I've started to rethink my position on sandwiches this week. Andrew and I were out of town for the long weekend and arrived back home late Monday night to an empty fridge. I haven't had time to do any grocery shopping since, so we've been making do with staples and freezer stock, as well as a loaf of bread and some apples that I picked up at the farmers' market near my office. Sandwiches have been on the dinner menu twice this week, and since our kitchen is always stocked with things like bacon, olives, and cheese, we've been able to make some pretty good ones.

With this post, I just wanted to give you an idea of some of the sandwiches that we're been making with the ingredients that we tend to keep around. We had bacon, apple, and cheddar sandwiches yesterday, and today I made an olive and tomato spread that went pretty well with grilled cheese (I had some slow-roasted tomatoes in the freezer, which came in handy). These recipes I've given aren't meant to be strict, and you should adjust the ingredient amounts to your liking.

What about you? Do you like to eat sandwiches for dinner? What are your favorite kinds to make? 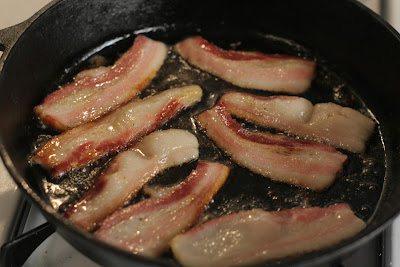 Blend ingredients together well in a food processor or mini chopper. I ate this on a sandwich with melted mozzarella and parmesan cheese, but you could also try it in a sandwich with grilled eggplant slices and goat cheese, or with grilled chicken, or maybe in a pita with some chickpeas, or toss it with pasta, or spread it on crackers...it's pretty versatile.

Bacon, cheddar, and apple sandwiches
The amounts I have listed in parentheses are what I used for a single sandwich; however, I used small slices of bread, so you might need more.

Heat a cast-iron skillet over medium heat. Place bacon slices in pan and cook, turning occasionally, until bacon is brown and beginning to crisp. Remove bacon and set on plate lined with paper towels to drain excess fat. Remove fat from skillet, leaving just a thin coating. Over medium heat, set one slice of bread in the pan and arrange cheddar slices on top. Cook until bread is toasted on the bottom and cheese is beginning to melt. Arrange bacon strips over cheese, and the apples slices over the bacon. Top with the second slice of bread and carefully flip sandwich over. Cook until the second slice of bread is toasted and the cheese is melted. Eat immediately.
Posted by Ranjani at 10:12 PM