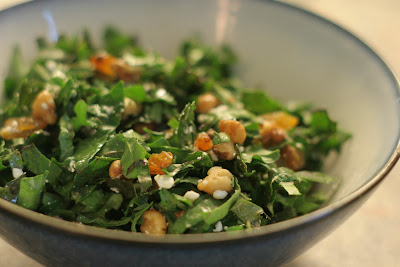 When I was younger, my parents would sometimes let me help cook when people were coming over for dinner. This resulted in some mishaps (accidentally putting way too much chile powder in a taco filling, for example), but there were also successes. In particular, I remember making a salad once with greens, blue cheese, apples, and walnuts. Until then, my salads had always consisted of lettuce with chopped vegetables, so the idea of a salad with fruit/cheese/nuts instead of veggies was something of a revelation to me. And I think that salad gave me my first taste of blue cheese, which I am very grateful for!

This kale salad was something I put together for lunch last weekend, and it came out really good. And it also gave me my first taste of a new cheese, ricotta salata in this case. I went for a sweet-salty theme with the salad - sweet raisins, salty cheese, sweet & salty roasted walnuts. The dressing is from The Gourmet Cookbook - Andrew and I bought both sherry vinegar and walnut oil in Bar Harbor during our honeymoon, so the sherry-walnut dressing seemed fated to be made in our kitchen at some point. 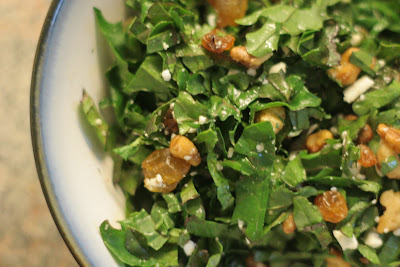 Preheat oven to 350 deg F. Toss walnuts with maple syrup and sprinkle with salt. Bake in preheated oven until toasted and crunchy, about 4-5 minutes. Let walnuts cool. Toss together kale, walnuts, ricotta salata, and raisins in a large bowl.

Whisk together vinegar, mustard, salt and pepper in a small bowl. Slowly pour in oil, whisking until well blended. (I make my salad dressing in a mason jar, and shake everything together instead of whisking).

Toss salad with enough dressing to lightly coat the kale (you will have leftover dressing). Eat salad within a few hours of dressing.
Posted by Ranjani at 12:39 PM