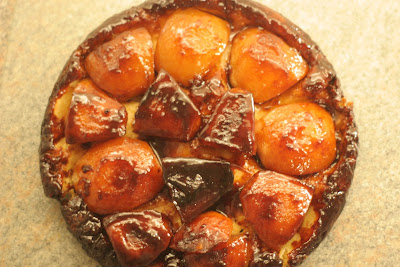 This week's Fall Fest theme ingredient is pears, and I decided to try making a pear tarte tatin. Tarte tatin consists of fruit (usually apples) caramelized in butter and sugar, then topped with a pastry crust and baked. When done, it is flipped over so that the fruit is on top. It's not as fussy as traditional tarts - since it is baked upside down, you don't have to worry about the crust getting soggy, which means no blind baking (yay!). And the presentation is supposed to be rustic, so you don't have to worry about making it look perfect. That being said, tarte tatin can still be tricky to make, as I discovered with this one.

This was my first time making tarte tatin. I had a couple problems - the recipe said to cook the pears in butter and sugar until the mixture turned a golden caramel color...but it was hard to assess the color with everything cooking in a black cast iron pan. Also, during baking, the caramel oozed over the sides of the pastry and burned a bit, as you might be able to tell from the photos. Maybe I didn't do a good enough job of tucking in the sides of the crust? Maybe I didn't cook the caramel the right amount on the stovetop? I'm not really sure what went wrong. But in any case, it still tasted pretty good! The crust was nice and flaky, and the fruit was sweet and scented with cinnamon.

Recipe notes: I was in a bit of a rush when I made this, so I chilled the dough in the freezer instead of the fridge to speed things up. The recipe called for Bosc pears, but I only had an Asian pear and a Bartlett, so I used those instead. It came out absolutely fine - they were both firm enough to hold their shape during cooking. Also, my pears were huge, so I cut them into quarters or eighths instead of halves.

I know that some of the other Fall Fest participants are more experienced with tarte tatin, so please let me know if you have any tips! 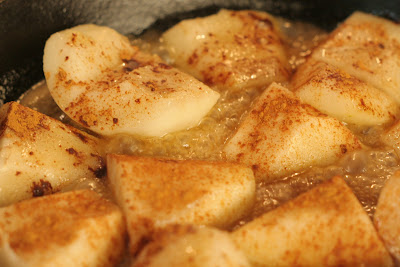 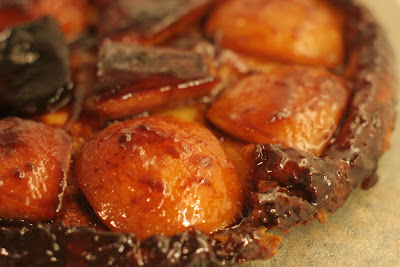 To prepare dough:
Pulse together flour, butter, shortening, and salt in a food processor (or use a pastry blender or your fingers) until the mixture looks like coarse meal, with some small, pea-sized pieces of butter remaining. Drizzle 3 tbs ice water over mixture and pulse until incorporated. Squeeze a small bit of dough - if it holds together, it's done. Otherwise, drizzle in more water 1/2 tbs at a time and pulse just until incorporated, then test again (I needed to add an extra 1/2 tbs to mine). Do not overwork dough or the crust could become tough. Note: my dough did not mass together in the processor, but it did hold together when I squeezed it.

Turn dough onto a work surface and split into 4 pieces. Use the heel of your hand to smear each piece forward once or twice to distribute fat. Gather all dough together, form into a 5-inch disk, wrap in plastic, and refrigerate for 1 hour (or up to 1 day).

To prepare tart:
Heat butter in skillet over moderate heat until it finishes foaming. Stir in sugar (it won't all dissolve). Arrange pears cut side up in the skillet, with wider parts pointing out, and sprinkle pears with cinnamon. Cook pears without stirring until sugar mixture turns a deep golden caramel color, about 15-25 minutes. Remove from heat and cool completely (keep pears in skillet).

Put a rack in the center of the oven and preheat to 425 deg F. Roll out dough on a lightly floured work surface into a circle with a diameter of about 9 1/2 to 10 1/2 inches. Place dough over the pears in the skillet and tuck edges in around pears. Bake in preheated oven until crust is golden brown, about 30-35 minutes. Cool 5 minutes in pan and then carefully invert onto a plate (or cutting board in my case). Serve warm or at room temperature. Tart keeps well in the fridge for a couple days.
Posted by Ranjani at 9:46 PM