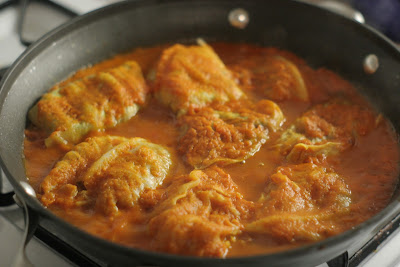 Yum...this may be my new favorite way to cook cabbage. I know I just told you about a cabbage recipe last week, but that one only used half a head, so I still had the other half to deal with. I had been thinking about making stuffed cabbage for a while, but most of the recipes I'd seen included ground meat of some kind, and I was really looking for something vegetarian. I finally found the perfect recipe in World Food: Greece, which is a big, gorgeous cookbook that my sister gave me. Greece is probably #1 on my list of places to visit, but until I find an opportunity to go, I'll have to make do with getting a taste of it at home.

The cabbage here is stuffed with a sweet and savory mixture of rice, raisins, and nuts, and then braised in tomato sauce. The ingredient list is simple, and the dish doesn't take much active time, but it takes quite a while for everything to cook, especially if you choose to use brown rice like I did. Totally worth it though. This made a great dinner with some bread on the side to dip in the sauce. And I bet the leftovers will be delicious! 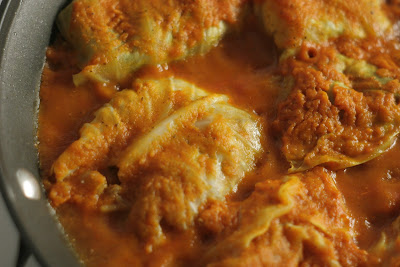 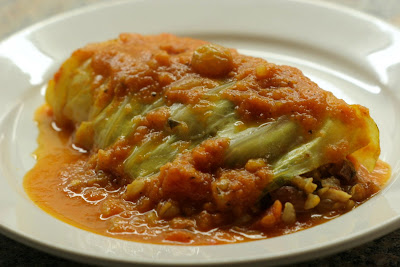 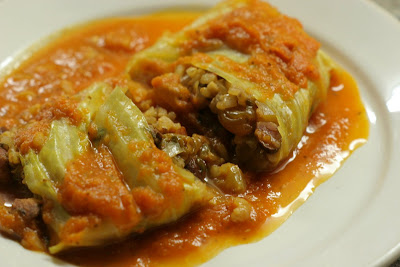 I made a couple minor changes to the ingredients, using parsley instead of mint and almonds instead of pine nuts. I also decided not to boil the cabbage leaves before stuffing - they cook fast enough in the tomato sauce and this cuts down on the number of steps and pots needed. And finally, I braised the cabbage on the stovetop instead of in the oven, but I'll include instructions for both methods here.

I started with half a cabbage, so it was pretty easy to remove leaves once I cut the stem out. If you are starting with a whole cabbage, I've heard that immersing the head in boiling water for a couple minutes will help make the leaves easier to remove, but I haven't tried this.

Chop 3-4 of the canned tomatoes. Heat 1 tbs oil in a large wide pan over medium heat. Add half of the onions and all of the garlic. Saute for 5-10 minutes, until onions are softened and browned. Stir in chopped tomatoes, raisins, rice, and mint/parsley. Add stock, bring to a boil, then cover pan, leaving a slight vent to release steam. Reduce heat and simmer until rice is tender and stock is absorbed. This will take about 15-20 minutes for white rice, and about twice as long for brown rice.

While rice is cooking, heat remaining 1 tbs oil in a 1-quart saucepan over medium heat. Add remaining onions and cook until softened and browned, about 5-10 minutes. Add remaining canned tomatoes along with their juice, oregano, and a pinch of black pepper. Bring to a boil, then reduce heat and simmer for about 15 minutes, stirring occasionally. Remove sauce from heat and puree with an immersion blender, or with a conventional blender or food processor. Season sauce to taste with salt and black pepper, and add red pepper flakes if desired.

When rice mixture is cooked, stir in pine nuts and season to taste with salt and pepper. Divide the stuffing among the cabbage leaves, and roll and fold the leaves up into packets. Lay the packets, seam-side down, in the pan used to cook the rice mixture. Pour tomato sauce over stuffed cabbage and cover pan. Bring to a boil over medium heat, then reduce to a simmer. Cook for 30 minutes, until cabbage is tender.

If you would like to braise the cabbage in the oven, then place the cabbage packets in an ovenproof dish or pan, cover with tomato sauce, and bake at 350 F for 30 minutes, until cabbage is tender.
Posted by Ranjani at 10:14 PM