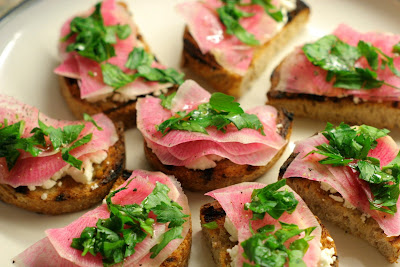 I am loving the March issue of Food & Wine! It's a theme issue about healthy recipes, but it's not about cutting calories or excluding fat - the focus is on flavor first, making delicious food that just happens to use healthy ingredients. I think about nutrition and healthy cooking with the same perspective, so this is right up my alley. I've already cooked two recipes from this issue, and I have a couple more planned for later this week. This is pretty unusual for me - I almost never make multiple recipes from a single magazine issue, not to mention all in the same week!

These feta and radish toasts were the first thing I made, and I'm submitting this post to Magazine Mondays. I've been buying amazing watermelon radishes at the Somerville winter farmers' market - they're gorgeously colored and mild enough to eat plain, but still fresh-tasting and flavorful. These toasts were a great way to use them for something other than a salad. The salty, creamy feta worked well with the crunchy radishes, and the parsley added a nice fresh aromatic note. This makes a nice start to a meal, and would be a good hors d'oeuvre for a classy party. 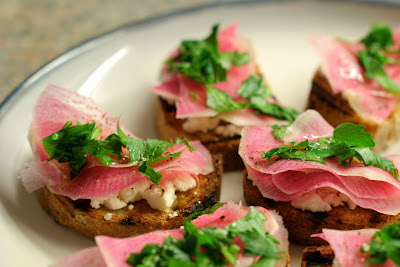 For this recipe, I prefer using radishes that aren't too spicy, like watermelon radishes. But any type of radish that tastes good to you plain would work well. Also, I'm not going to give exact amounts for the ingredients here - it's a pretty flexible recipe and you can adjust the proportions to your taste.

Brush both sides of bread slices with olive oil. Heat a cast-iron grill pan and grill bread over high heat until toasted, turning once (alternatively, you could bake the bread in the oven until toasted, 350 deg F or so). Top the toasts with feta, radishes, and parsley. Drizzle with extra-virgin olive oil and sprinkle with salt and freshly ground black pepper.
Posted by Ranjani at 2:00 PM