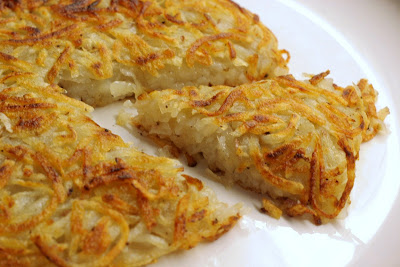 Andrew and I had some friends over for brunch last weekend. When I was planning the menu, the idea of making potato pancakes or latkes crossed my mind, but I didn't want to deal with the hassle of cooking individual pancakes and keeping them all warm and crisp. This recipe is the perfect solution - too bad I found it a week late...anyway, this recipe makes one large potato pancake which can be cut into wedges for serving. The outside is golden brown and crisp, and the inside is soft and creamy. The Gourmet Cookbook recommends serving this as a bed for meat, because the tangled potato strands soak up juices nicely, but we ate it with eggs this morning. Whatever you choose to serve it with, it's really good!

Recipe notes: I cut the recipe in half and cooked the pancake in an 8-inch skillet instead of 12-inch. I also used red potatoes instead of russet, since that is what I had in the pantry. I'm sure russet potatoes would give a different texture, but I still enjoyed the result with red potatoes.

Peel potatoes and grate using the large holes on a box grater, or the coarse shredding attachment on a food processor. Working in batches, gather grated potatoes in a clean kitchen towel and wring out as much liquid as possible. Put potatoes in a bowl and toss with salt and pepper.

Heat 3 tbs butter over moderately high heat in a 12-inch nonstick skillet. When foam subsides, reduce heat to moderate, spread potatoes in skillet, and press them down with a spatula. Cook until bottom of cake is golden brown and crisp, about 12 minutes (I cooked my smaller cake for 11).

Slide cake onto a large plate. Invert another plate over it, and flip the cake onto the second plate (with the smaller skillet, I was able to flip the cake directly from the skillet onto a plate). Heat remaining 2 tbs butter in skillet over moderate heat until foam subsides. Slide cake into skillet, browned side up, and cook until bottom is golden brown and crisp, about 12 minutes more (10 minutes for my smaller cake). Slide cake out of skillet and cut into wedges.

Note: according to the cookbook, you should be able to make this up to 30 minutes ahead of time, keep it at room temperature, and then reheat in a 450 deg F oven for about 5 minutes.
Posted by Ranjani at 10:31 PM

Email ThisBlogThis!Share to TwitterShare to FacebookShare to Pinterest
Labels: brunch, potatoes, side dishes