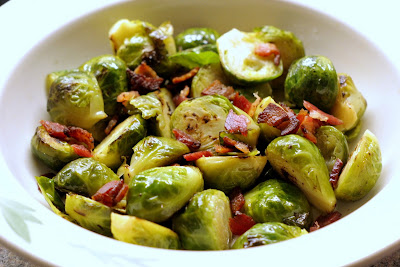 This recipe is my second contribution for this week's brassica-themed Fall Fest. As I mentioned in the last post, I had some trouble at first getting excited about brassicas, which are not the most glamorous of vegetables. However, I did have some brussels sprouts in the fridge and used Fall Fest as an opportunity to find something new to do with them.  I ended up making this simple, tasty side dish of braised brussels sprouts tossed with a savory bacon dressing. This recipe might be a good way to try to convert people who don't like brussels sprouts - a little bacon always helps, right? 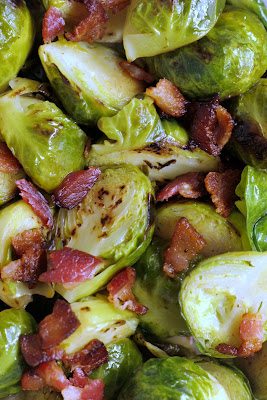 Heat 1 tbs olive oil in a large skillet over medium high heat. Add brussels sprouts and cook until sprouts are browned in spots, about 5 minutes. Add 1/2 cup water to skillet and bring to a boil. Reduce to a simmer and cover skillet. Cook until sprouts are tender, about 7-9 minutes.

Meanwhile, cook bacon in a skillet over moderate heat until crisp. Remove bacon with a slotted spoon and drain on paper towels. Pour off all but 1 tbs fat from the skillet. Add water and vinegar to skillet and simmer, whisking constantly, for 1 minute. Season to taste with salt and pepper.

Immediately before serving, toss sprouts with dressing and top with bacon. Note: I only used about 2/3 of the dressing for this amount of sprouts. Leftover dressing can be used on other vegetables.
Posted by Ranjani at 9:32 PM