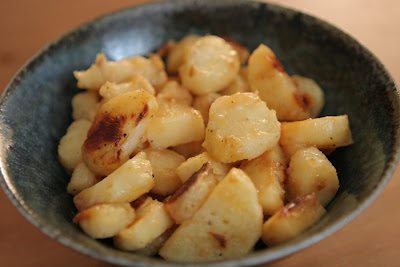 So, it's been a long time since I've posted a vegetable recipe - I was getting pretty sick of winter produce for a while there. But now, in spite of the little bit of snow that may still be headed our way, spring is slowly coming. Flowers are coming up, and the very beginnings of spring vegetables are starting to appear at the markets. In a few weeks, the spring growing season will really get going, but for now we've got parsnips. A couple days ago, I saw a cooking demonstration with one of the chefs from Clover. He made a roasted parsnip salad with spinach, pickled onions, Aleppo pepper, and an orange vinaigrette. I really liked the combination of vinegar with the sweet parsnips and decided to try making a simplified version of the dish at home. I made a quick vinaigrette with olive oil, white wine vinegar, and a touch of chile powder. I also added some honey to accentuate and add some depth to the sweetness of the roasted vegetables. The parsnips were terrific with the vinaigrette and made a great side dish to our roast chicken last night.

Preheat oven to 400 deg F. Toss parsnips with a splash of olive oil and sprinkle with salt and pepper. Spread in a single layer on a large pan. Roast until browned and tender, about 20 minutes, flipping halfway through. Meanwhile, whisk together vinegar, extra-virgin olive oil, honey, and chile powder. When parsnips are finished roasting, allow them to cool slightly, then toss with vinaigrette. Serve warm or at room temperature.
Posted by Ranjani at 4:09 PM