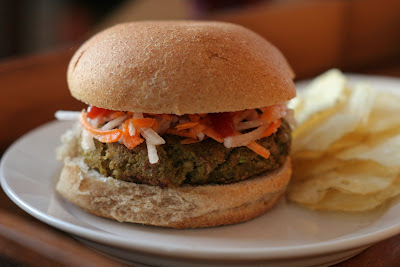 Veggie burgers are my meal of choice when I go out for pub food. Really, all I want is the fries so I don't usually miss the beef too much. Although I've eaten many variations of veggie burgers at restaurants, I don't have much experience making them myself, so I was excited to see this recipe in this month's issue of Food & Wine. The recipe is by Richard Blais of Top Chef fame, and the list of ingredients is insanely healthy. I understand that this might not be as much of a selling point for you as it is for me, so I will also tell you that these veggie burgers actually taste really good. The texture is a bit too smooth for them to really be burger-like (this is probably my fault, because I used bulgur wheat instead of Isreali couscous), but they hold together well and the flavor is great. And, they're vegan!

The ingredient list is a bit daunting, since several of the components have to be pre-cooked, but the patties freeze well so one batch will probably last you a while. I've been eating these just with ketchup, but I think some quick-pickled veggies would add nice acidity and crunch. The original recipe suggests serving the burgers with greens tossed in lemon juice, and pomegranate ketchup (1/2 cup ketchup + 1 tbs pomegranate molasses), which also sounds good.

I've got a couple other veggie burger recipes that I'm thinking of trying, so hopefully I'll have a little veggie burger series up on the site soon!

Using a food processor, combine and finely chop the raisins and almonds. Add the white mushrooms and process until coarsely chopped. Add the edamame, lentils, and 1 cup of bulgur and process until coarsely chopped. In a small bowl, dissolve the curry powder in the lemon juice and add to the processor along with the ground porcini mushrooms. Process the mixture until it forms a coarse paste. Fold in the remaining 2 cups of bulgur wheat and season mixture with salt. Form into 10 patties, about 1 inch thick. At this point, patties can be frozen and cooked later.

To cook patties, lightly coat a large nonstick skillet with canola oil and heat. Add patties to the pan and cook over moderate heat until well browned, turning once, about 6 minutes total. Place patties in buns and serve with ketchup, greens tossed with lemon juice, or lightly pickled vegetables.
Posted by Ranjani at 6:58 PM