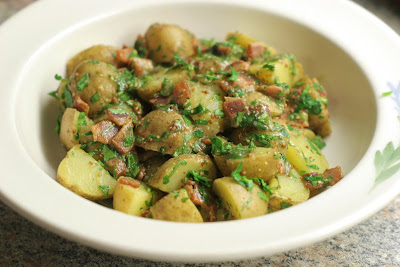 I'm not really a fan of American-style potato salad. It tends to be gloppy with too much mayo, which just kind of grosses me out. This German potato salad, though, is another story, totally different than the cold potato salad you might be used to seeing at barbecues. It's served warm, with a tart bacon and vinegar dressing and some fresh parsley. We both really enjoyed it, and I think it would make a nice accompaniment to a number of dishes.

I found this recipe when I was looking for something interesting to do with some Yukon gold potatoes that I got at the farmers' market (farmers' market! in the winter!). The recipe comes from The New Best Recipe by the editors of Cook's Illustrated magazine. It's a great book - I love the descriptions of the extensive testing that goes into each recipe. It really helps me understand how variations in ingredients and cooking techniques can affect the final product. And I can always trust that the recipes will come out good! 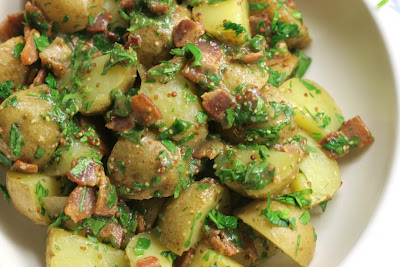 Put potatoes and 1 tbs salt in a large pot or saucepan and cover with water. Bring to a boil over high heat, then lower heat and simmer until potatoes are tender, about 10 minutes. Reserve 1/2 cup of the potato cooking water, then drain potatoes. Return potatoes to the pot and cover to keep warm.

While potatoes simmer, cook bacon over medium heat in a large skillet (not nonstick) until browned and crispy, about 5 minutes. Transfer bacon to a plate lined with paper towels to drain. Pour all but 1/4 cup bacon fat out of skillet. Add onion, and cook over medium heat, until soft and beginning to brown, about 4 minutes. Stir in sugar until dissolved, about 30 seconds. Add the vinegar and 1/2 cup potato cooking water and boil until reduced to about 1 cup, 3 minutes or so. Remove from heat and whisk in mustard and pepper. Add potatoes and bacon to skillet and toss to coat potatoes in the dressing. The dressing may look too thin at first, but the potatoes will absorb it. Stir in parsley and season to taste with salt. Serve immediately while potatoes are still warm.
Posted by Ranjani at 10:03 PM