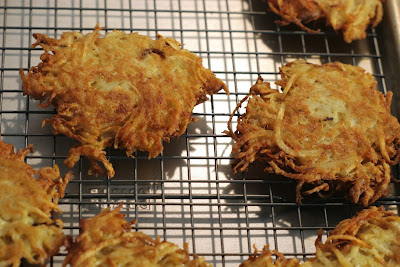 I tagged this recipe when I bought my first celery root this past fall, and although I didn't make it back then, I'm glad I remembered it when I bought celery root again this week. The celery root makes these latkes really unique and flavorful, and I enjoyed them quite a bit. I suppose it is a bit late in the holiday season to be posting a latke recipe...however, I think these could be a good addition to a New Year's Eve meal.  They'd make great appetizers to go along with some beer, and would also be a nice side dish, if you're looking for something starchy. And you might as well get some fried food in before those resolutions kick in!

While these latkes are delicious on their own, I do think they'd be best with some kind of sauce or chutney as an accompaniment. The recipe suggests applesauce or sour cream, but I didn't have either of those around. I ate mine with ketchup, but that was kind of boring and didn't really complement the celery root that well. I'm thinking that a spicy apple chutney would be great. I'd love to hear any ideas you have! 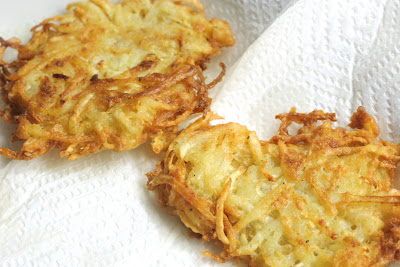 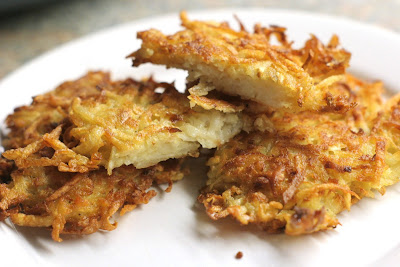 Preheat oven to 250 deg F. Place an oven-safe wire rack on each of two baking sheets.

Grate celery root into a large bowl using the wide holes on a box grater or the shredding disk of a food processor (see Note). Peel potatoes and coarsely grate into a second bowl. Toss potatoes with lemon juice. Coarsely grate onions into the same bowl holding the potatoes. Place potatoes and onions on a clean kitchen towel (not terry cloth), gather up corners, and wring out as much liquid as possible. Transfer potatoes and onions to the bowl holding celery root and add flour, eggs (see Note), salt, pepper, and celery seed. Stir until well mixed.

Heat 1/3 inch oil in a nonstick skillet (10- to 12-inch) over moderately high heat until hot but not smoking. Scoop 1/4 cup of latke mixture into skillet and flatten with a slotted spatula to 3 inches in diameter. Form 2-3 more latkes in the same manner, depending on size of skillet. Fry until the undersides are deep golden brown, about 1 1/2 to 3 minutes. Flip latkes over (this is easiest using two spatulas) and fry until second side is deep golden brown, about 1 1/2 to 3 minutes longer. Transfer cooked latkes to paper towels to drain. After latkes have drained briefly, place them in a single layer on one of the racks on the baking sheets. Keep latkes warm in the preheated oven while frying remaining latkes in the same manner.

These latkes are best served within one hour.

*Note: if you grate the vegetables with the shredding blade on a food processor, use 5 eggs. If you use a box grater, use 4 eggs. This has to do with the coarseness of the grating, and the amount of binding needed.
Posted by Ranjani at 10:53 PM