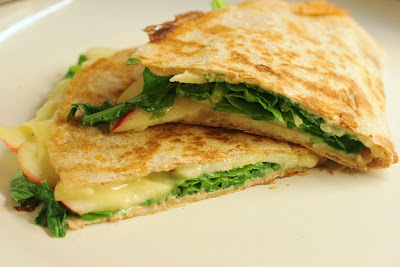 I have been super busy ever since the fall semester started up a few weeks ago. I'm trying to get my thesis research to the point where I can start to see the light at the end of the PhD tunnel, taking a class, doing some community work, and of course, cooking and blogging! Lately it has become very clear that I need to change my usual pattern of cooking fairly elaborate and time-consuming dinners every night. So I've been trying to to get some quick and simple recipes into my repertoire, and also save time by doing some cooking and vegetable prep over the weekend. I'm also trying to keep the freezer stocked with things like soup, meatballs, pesto sauce, etc. that help get dinner on the table fast (I'll be posting some of those recipes in the next few days). What do you do to keep weeknight meals quick but still interesting?

This quesadilla recipe is a perfect example of a quick, tasty meal. I found the recipe in the October 2010 issue of Cooking Light, and decided to make it for this week's Fall Fest, which features apples. (I originally wanted to make apple pie, but didn't get to it over the weekend, and yeah - see above paragraph about not making complicated things on weeknights). I really liked the mustard and apple cider mixture, and thought all the ingredients came together to a make a unique and sophisticated quesadilla.

An aside about apples - don't you love the apples that are at the farmers' markets now? The variety is amazing, and they are all so good. Plus I won't eat an apple unless it is perfectly crisp, and those are kind of hard to find at the supermarket. Fresh apples are definitely one of my favorite things about autumn in New England.

Some notes on the recipe: I had some trouble fitting all the arugula into the quesadilla - maybe it would work better if I let it wilt just a bit before trying to fold the tortilla over. I used a Honeycrisp apple, and I think I'll add more next time - half an apple per quesadilla would be good. Also, we had some whole wheat wraps around, so I used those instead of tortillas - tasted great. 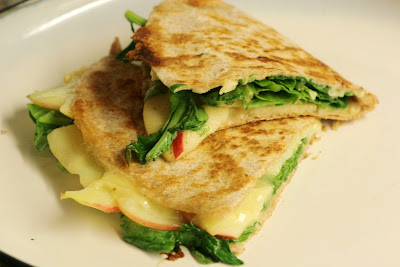 Mix together the mustard and cider in a small bowl. Heat a large nonstick skillet over medium heat. Spread one tortilla with about 1 1/2 tsp of the mustard mixture, and place tortilla in the pan. Spread one-third of the Brie slices over half of the tortilla. Cook until cheese begins to melt, about 1 minute. Arrange one-third of the apple slices over the cheese, and top with 1 cup of arugula. Sprinkle with 1/4 tsp pepper, and fold tortilla in half, pressing lightly with a spatula. Cook until golden brown on both sides, about 2 minutes per side. Remove from pan and repeat with remaining ingredients. Cut quesadillas into wedges and serve immediately.
Posted by Ranjani at 11:28 PM